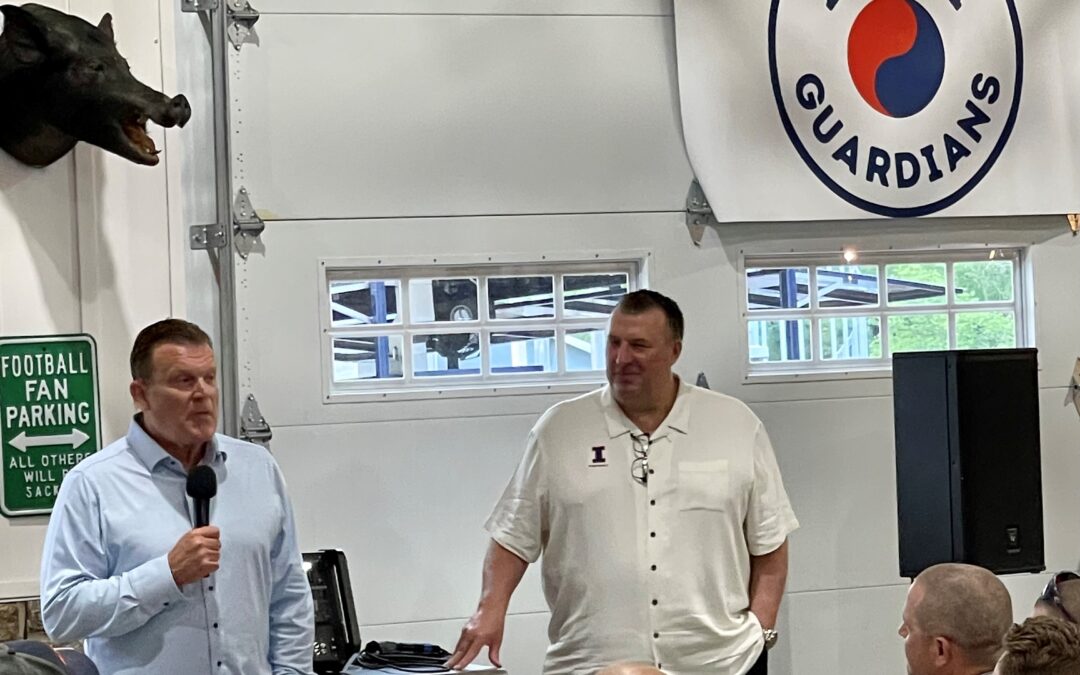 DECATUR, IL — Josh Whitman stood in a big garage south of Decatur. On a cart to the side of him were basketball jerseys signed by Illinois basketball players Luke Goode, RJ Melendez and Skyy Clark. The Illinois athletic director was a headliner of a fundraiser for the school’s NIL Collective, Illini Guardians.

Days after the Illinois legislature passed a bill on Friday allowing universities to facilitate NIL deals, Whitman, basketball coach Brad Underwood and football coach Bret Bielema were in a room addressing over a hundred donors.

The new law allows Illinois to be direct players and facilitators in the NIL space rather than observers, and being at the Guardians’ first fundraiser shows the athletic department isn’t wasting any time getting involved and endorsing the school’s biggest NIL collective.

“Number one, make no mistake, Name, Image, Likeness is the biggest change to come for college athletics since the adoption of athletic scholarships in the 1950s,” Whitman said. “And like any disruption that comes to the industry … when disruption occurs, some organizations take advantage of the disruption of the game and an opportunity, others fall by the wayside.”

Illinois isn’t the first state to amend an earlier NIL legislation. The state signed its first NIL law July 1, 2021, and joins states like Tennessee and Mississippi that allow schools to facilitate NIL transactions by matching athletes with businesses or organizations.

After Underwood and Bielema spoke, there was an auction to hand out those jerseys and other things like a golf lesson with men’s golf coach Mike Small.

All three asked the donors to put money into Illini Guardians. The Guardians also advertised a subscription model that includes meet and greets with coaches and players.

“Give, give, and give some more,” Underwood said.

The highest tier, costing $10,000 a year or $1,000 per month, gets the subscriber an autographed Illinois basketball jersey.

Coaches also addressed the link between NIL and the transfer portal. In men’s basketball there are currently over 1,700 players who have entered the portal.

Illinois lost a quartet of players to the portal, and in the future teams without robust NIL networks will be at risk of losing large portions of their roster each year.

“Illini Guardians is going to give us the opportunity, because of you, to help maintain and retain athletes from going other places,” Underwood said to the crowd. “So it’s vital, your support.”

The same idea goes for football as well. Bielema said he wants to take advantage of the transfer market in a similar way he did while at Wisconsin where his first transfer was Central Michigan transfer and future NFL AllPro J.J Watt. He also got Super Bowl winner Russell Wilson as a graduate transfer.

NIL is going to have to be a main driver for him to get and keep that kind of talent to Champaign. Breakout tight end Daniel Barker was one of the players who left Illinois in the transfer portal to go to Michigan State, a team that played in a New Year’s Six Bowl last season.

“The thing you can do to help us, it gives us a chance to keep our current roster in play,” Bielema said. “Because as we build our roster, right, as we build this thing and continue to go to a new height and a new level, our players are going to have options to go to other places.”

Illinois currently has a small NIL office, with Kam Cox the program’s director. It’s unclear if Illinois will expand that department. With new legislation and an NIL arms race developing in college athletics, they will likely have to. Whitman was clear about the athletic department’s sense of urgency on the recent developments.

“This is our chance,” Whitman said. “This doesn’t happen every day, where the industry gets disrupted. There’s a chance for us to take advantage to move up some slots in the pecking order.”